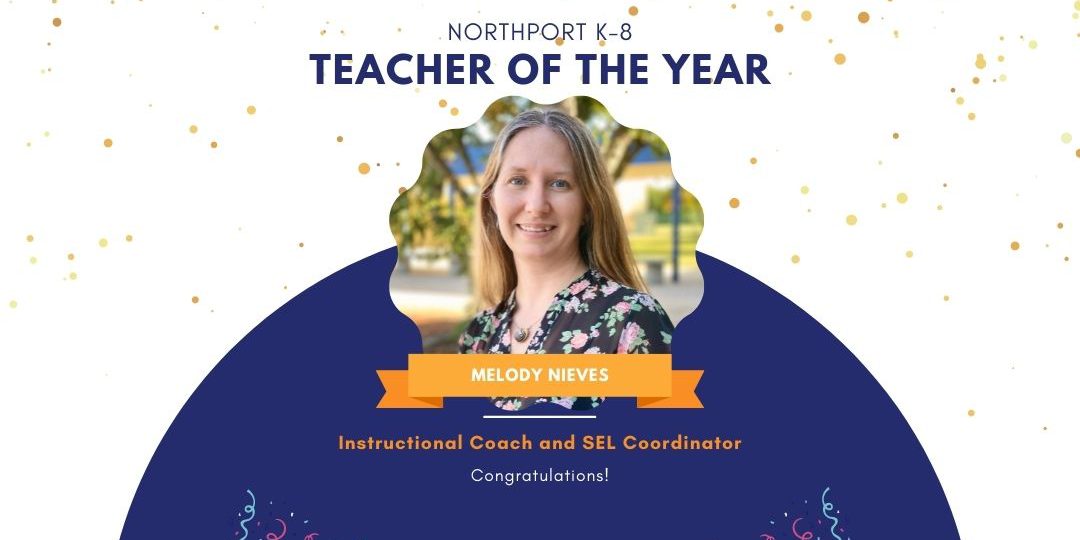 Melody Nieves, a Queens, New York native, was named Northport K-8 Teacher of the Year Wednesday, October 19. She has been an educator for 22 years and began her journey in the inner city in Queens, New York, after student-teaching for a year in Spanish Harlem, New York City.

Nieves has been an educator in St. Lucie County since 2004 and has spent the bulk of those years in Kindergarten and First Grade serving as team leader. She is also a clinical educator, mentor, grant-writer, gifted liaison, Working of the Work (WOW) coordinator, textbook adoption committee member, FLKRS tester, baby benchmark assessment team member, and trainer for Kagan, Balanced math, and Thinking Maps.

In addition to her impressive teaching portfolio, she is also a proud wife and mother.

“One of my greatest accomplishments is marrying my first love,” said Nieves. “We have, now, been married for 21 years and recruiting Mr. Nieves to work with us at Northport K-8 has been a blessing.”

They met when they were 11 and 13-years-old. Now, they continue to serve together in church and at work.

In February 2016, Nieves became an Instructional Coach, while still serving as Kindergarten Team Leader for the remainder of the school year.  She was focused on K-2 during that time, but despite her resistance, quickly, became coach for middle school science and social studies.

“Working with middle schoolers used to terrify me, until I realized that they are, really, just big kindergarteners, who need love, attention, respect and positive rewards,” said Nieves.  “I grew to love my time with middle school and now find myself, truly, enjoying all grades K-8.  I believe in building relationships with teachers and students and have come to love my new role as Social Emotional Learning (SEL) coordinator, although I know time is limited and we still have a long way to go with its implementation.”

Building relationships doesn’t stop with the students for Nieves. As an instructional coach she has the privilege of working with a vast majority of the faculty and staff on campus.

“I have the privilege of working alongside so many amazing educators,” said Nieves as she described her coworkers who diligently face this year with a growth mindset and positive attitude. “[They do it] all with an unwavering focus on doing what’s best for the students and each other. I’m in good company, that’s for sure!”

The next steps for Nieves will land her at the District level where she will be competing with educators from other schools.

“Melody Nieves is an incredible teacher who will do anything in her power to make sure both teachers and students are successful,” said Principal Glenn Rustay. “We are proud that she is a part of the Northport family.”

Northstars on a Roll with Moving Robot Projects
November 4, 2021