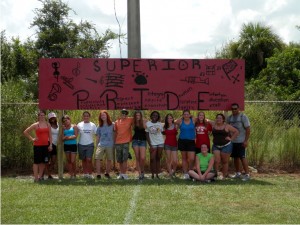 The band program consists of several performing ensembles. The first is the Concert Band in which all ninth grade students who wish to participate must enroll. The second is a percussion ensemble where percussionists will work on band literature as well as a number of percussion fundamentals. The next ensemble is the Symphonic Band which is the main performing wind band. This is the group that represents the school in the spring during FBA MPA Concert Festival. Freshmen may participate in this
performance at the discretion of the director. Additionally, there is our Music Appreciation class which serves as a beginning band as well as an opportunity for current band students to learn a secondary instrument. 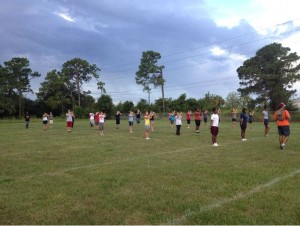 Hard-working students, dedicated parents, a supportive administration and community combine to create a dynamic and vibrant band program that is unequaled in Saint Lucie County. Our students are expected to set a standard of excellence that is paramount to the development of upstanding citizens. Members of the FPW Band Program grow musically, mentally, ethically and physically.

Membership in this group is open to all students and is MANDATORY for new members to the FPW
Band Program. It is also required for membership in Percussion Techniques, Concert and Symphonic Band.
The Marching Band is active during the fall semester, performing at Varsity football games, several local
parades and special civic functions. The band holds rehearsals twice weekly following school and performs
at competitions and the FBA Marching Festival. There is a band camp scheduled once a year prior to the
start of the school year that is mandatory for all members.

Membership in this group is open to students who have successfully completed a year of Concert Band or
Music Appreciation, or by audition with the director. Membership in the Marching Band is a prerequisite.
Members of this ensemble are HIGHLY encouraged to participate in District Solo and Ensemble Festival.
This ensemble performs at the winter and Spring Concerts as well as FBA Concert Festival. Members are
HIGHLY encouraged to audition and participate in All-State Band and Four-County Band.

Membership in this group is open to freshmen and students who, at the recommendation of the director,
wish to participate in a performing concert ensemble. Membership in Marching Band is a prerequisite.
Members of this ensemble are encouraged to participate in District Solo and Ensemble Festival. This
ensemble performs at the winter and Spring Concerts. Selected members may perform at the FBA Concert
Festival. Members are encouraged to audition and participate in All-State, St Lucie Honor Band and Four-
County Band.

Membership in this group is open to students in grades 10-12 who have successfully completed a year of
Concert Band or Music Appreciation or by audition with the director. Membership in Marching Band is a
prerequisite. This group participates with every performance of the Symphonic Band. Additionally, this
group performs separately during the winter and spring concerts. Members are HIGHLY encouraged to
audition for All-State and Four-County Band. Members of this group are also HIGHLY encouraged to
perform at District Solo and Ensemble Festival, however there will be a class-based ensemble in addition to
any other performances students may prepare.

Membership to this group is by director permission and/or audition. The Jazz Band will perform at the
District Solo and Ensemble Festival. Additionally, the Jazz Band will perform at the winter and Spring
Concerts as well as special civic and extracurricular functions. Members are HIGHLY encouraged to
audition for the All-State Jazz Band. Jazz band will have a rehearsal schedule after school. Band members
will be made aware of this shortly after the beginning of the school year.

Membership in this group is open to all students who seek to complete the fine arts requirement. In order
to meet this requirement, students will be taught to play a band instrument. The class will begin with the
selection of an instrument. Consideration will be given to aptitude and instrumentation of the class.
Students will be required to purchase a music book for practice and rehearsal, and they will be required to
rent an instrument. The school has a limited supply of instruments for rental at a rate of $50 per semester.
Other options are local music stores such as Music Man, Academy of Music or Music and Arts. Every
effort will be made to keep the cost of rental down; however, it is necessary to ensure the proper
maintenance of the instruments. These students will have to option to continue in a band class after one
year of Appreciation.