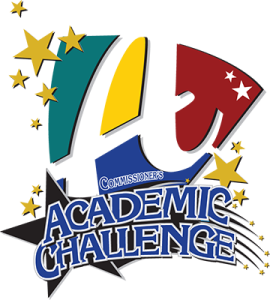 What is Academic A Team?

The Academic A Team is an after school club that exists for those students who love learning to train for the county academic challenge. Those who do well at the county competition win a spot on the county team to participate in the state tournament held each year at the Walt Disney World Resort. It gives each member of the club a chance to dive into topics that they like to learn about and share them with the group. Club meetings consist of practice competitions among the club. In past years, the A Team has hosted “Jag Jeopardy” an epic battle where they compete against a team of their favorite teachers in front of the student body. Jags in all grades who are in good academic standing are invited to join.

The Commissioner’s Academic Challenge is a highly academic statewide high school tournament inaugurated in 1986. The districts are placed in three divisions based on the fall FTE summary provided by the Florida Department of Education. Each team consists of six members (a maximum of four players during each of the three rounds and two alternates) and a coach. A maximum of six teams may compete in one competition round. This is not a quick response, “Trivial Pursuit” contest. Instead, it is a slower-paced tournament in which players are asked questions from the areas of language arts, mathematics, science, social studies, the fine arts, world languages (French and Spanish) physical education, health, and technology. The questions are written by educators from high schools throughout the state.

To see the Academic A Team in competition, view this YouTube video: 2020 Academic Challenge